Can you escape debts by changing countries and states?

DebtConsolidationCare
By: Phil Bradford on 09 Oct '18 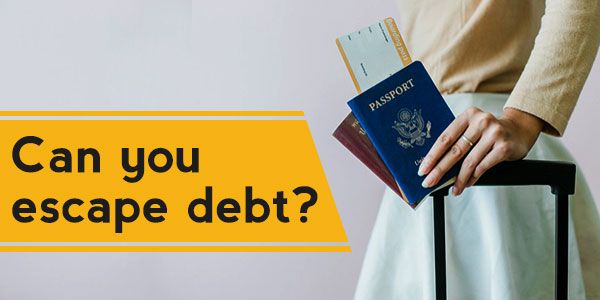 Ethically, not paying back debts is one type of theft and an act of stealing, actually!

You owe someone money and you are not willing to repay! What does that even mean? It means you are a con man!! Believe it or not.

But here is the twist! It’s okay, you can be a man so con unless you get caught!!

Hence the topic we will be dealing right now is pretty interesting.

If it is easy to escape debts by moving to another country or state:

The creditors are some of the smartest creatures you encounter on Earth. They seem to know every place in this world. No matter how hard you try to escape paying off debts, the creditors and collectors will figure out every way possible to get back the money, if the amount of debt is really huge.

For some $1K or $2K debts, probably they won’t harass you much, as bringing down judgements on you in a different state or country is a pretty costly deal! The court proceeding is so pricey that it will be a loss for them to go behind such small amounts!

But, don’t you ever think they can’t trace your whereabouts in some other distant land. They very much can, and the fact that they won’t come for you if the debt amount is small, is also questionable!

What steps can you take, if you really want to escape your debts?

Whenever anyone asks me how to get rid of debts, or how to escape debts, I say, you just can’t. I instead tell them that what they can do is deal with their debts, face to face!

If your debt amounts are really big and you feel there’s no way you can pay it off in full or even half of the amount, then you should try out debt settlement!

Settling your debts is what I think the best thing you can do, to maintain your credit, and also for happily saying goodbye to the creditors!

Still, settlement can also not be an option if your saved up amounts are not enough to offer a lump sum against your debts!

In that case, you might think to escape your debts by running away from them!

But, there are many costs associated with your moving to a new state or country, like finding a residence in that foreign land, finding a job, getting a decent neighborhood, and so on!

Plus there’s lifestyle cost! I believe, it’s better to pay off your debts in a lump sum amount and get done with it for good, than roaming around state to state.

Eventually, there’s another option open to you if you are really helpless! It’s none other than bankruptcy.

There’s absolutely no reason to be scared of any social reputation or stigma that’s connected to bankruptcy. What can you do, if you don’t have enough money to pay off your debts? At least you are not running away from a situation like a coward!

Even if your plans are to run away, then,

Here’s what the creditors and collectors can do to trace you and collect your debts in a different land:

Moreover, if you think that you have strong contacts with high authority personals, the federal bureau, tax officers, or the government itself, then you would not have been here reading this article!

You would have already run away with the money to anywhere you wanted to! Coz, real men don’t make a fuss, they do hush hush!

With proper help you can
Get FREE debt counseling and assistance
Get Debt Relief Now
How much debt consolidation
can save you
Recent Posts
What are the best financial tips for a h...
6 Most effective strategies to achieve 8...
What you need to know about credit card ...
What is a personal finance statement and...
How to get your desired financial figure...
Copyright © 2018  DebtConsolidationCare Official Blog