It seems that the controversy regarding debt ceiling is not going to end soon. National debate is going on as to whether the debt limit should or shouldn't be increased. The government has not been able to come to a conclusive decision yet. Financial experts say that if the government is not able come to a decision by 2nd August, 2011, then the country won't be financially able to repay its bills fully.

Read on to know about 5 important questions often asked by the people about debt ceiling. 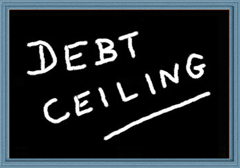 Here are the 5 questions that are often asked by the consumers on debt ceiling:

Q1. What debt ceiling is all about?

A. It is the limit imposed by the Congress on the total debt amount the government can borrow. The limit is imposed on the debt owed to Social Security, Medicare, and public. According to a nationally recognized financial institution, the first debt limit was set at $11.5 billion in the year 1917.

Q2. Has the lawmakers increased debt ceilings in the past?

A. The debt ceiling has been increased in the past. Research shows that lawmakers of the country have raised the ceiling at least 74 times since 1962. It is said that the debt ceiling has been hiked for around 10 times since 2001. Financial experts are of the opinion that the similar trend is going to continue in the next few years. If the federal government does not change its financial policies, then the country is likely to face this kind of a situation often.

Q3. How do the lawmakers determine the ceiling?

It is not official. But, usually Congress increases the debt ceiling whenever there is popular demand for hike in spending or tax deductions. It is said that the US President, Barrack Obama has signed a bill for rising the spending and reducing the revenues. So, the main debate is about whether or not the government will repay the debt it has accumulated.

Lawmakers who advocate for increasing the debt ceiling are regarded as fiscal spendthrift. So, some of the politicians may vote for a small raise in the debt ceiling. But others are expected to demand for a larger increase to avoid facing the same scenario for sometime.

Q4. What is the total debt limit at present?

A. It said that total debt limit at present is around $14.294 trillion, which is a mammoth amount. The debt limit of the nation reached this figure on 16th May 2011. The debt limit on the next day was around 14.293 trillion. This does not mean that the debt level has decreased. The debt amount fluctuates from day to day. Financial experts are of the opinion that government can reduce the debt level by drastically cutting down the investments.

Q5. What will happen if the ceiling is not increased?

A. The following things may happen if debt ceiling is not raised by the lawmakers:

Finally, some financial experts are not yet losing hope. They are of the opinion that if the debt ceiling issue does not get resolved by 2nd August, 2011, then also Congress will have some money to fund the government.