Get ready for the next recession with a solid budget plan

You might have seen the latest financial updates and also well informed about a piece of shocking news. Yes, U.S. economic expansion is probably facing another hit by the recession in the coming days. More than 100 real estate and economic experts predicted that the next recession is going to hit us in 2020. However, some experts think it will happen in 2021. Whatever be the year, a recession is supposed to happen soon.

On August 14, 2019, the entire stock market was shocked when the yield curve inverted for the first time in many years. The yield curve is a regularly monitored signal of recession. It provides a view for the investors so that they can balance short-term versus long-term investments. 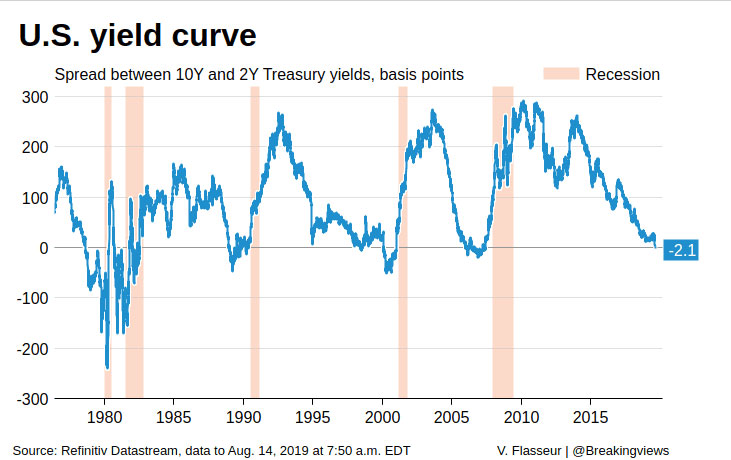 It’s not confirmed when the next recession will hit us. We also don’t know the actual reasons behind a recession and how we can reduce its effect on our finances.
Let’s find out the factors that trigger a recession.

#Internal factors that trigger a recession

Numerous factors may cause a recession. It can be divided into two large groups, 1. internal (endogenous) and 2. external (exogenous).
Internal causes will include the “accumulation of fundamental contradictions” within the economic system. For example, the Asian financial crisis in 1997-1998. The incident is responsible for overheating the private sectors, which influenced the global recession. The world financial crisis in 2008 as well as the current recession are the outcome of internal factors.
The external one is depending on multiple obstacles such as revolutions, wars, natural disasters, climatic changes, crop failure, etc.
Economists who consider the neoclassical tradition may also provide great importance to state regulations, labor unions act, business monopolies, and technological failures as external factors that can trigger a recession.
So, “are we headed for a recession?” The answer is uncertain at this point, but a survey conducted by GOBankingRates revealed that 44% of citizens expect that a recession is nearby, within 6 to 12 months.

Check out the below-given factors that trigger a recession.

Since Trump was elected as our president, the market has often shifted upward or downward considering his tweets. Trump has a positive view that there is no recession. But at the G7 summit, he gave a mixed signal regarding the situation and expressed his regret for escalating the ongoing US-China trade war.
Although Mr. President has cut off the interest rates, many economists are still anxious about Trump’s aggressive views on trade which may trigger a crisis.

Many economists elaborated that President Donald Trump’s 2017 Tax Cuts and Jobs Act expanded the length of the economic cycle. Democrats protest against the act by saying that such cuts will provide benefit to big business at the expense of us, the American consumers.

US policy may have an important effect on the performance of our economy. You can say that no other policies have put so much light on trade, specifically, the US-China trade war.

Due to the increased tariff or taxes, the prices of imported goods are also getting increased. For that reason, the trade between the two countries has become unstable. With higher import costs, economic activities are getting downwards, often as low as at recessionary levels.

#How to prepare your budget for the next recession

The most important way to fight the recession 2019 is by identifying your spending habits in the first place. For this reason, personal budgeting becomes critical. So, you need to control your expenses through budgeting. This way you have the knowledge and requirement to track your spending. Last but not least, it will also help you to stop overspending on unnecessary items.
Moreover, budgeting enables you to build savings that might come in handy if you face any financial crisis.

Let’s check out the options that you may choose while creating a budget for the recession 2019:

During recessions, you may face the risk of losing your job. So, it is important to create emergency funds to survive employment issues. With an emergency fund, you can save a decent amount to face any money crisis, or some big and unplanned cash requirements. Budgeting for an emergency is as important as retirement planning. You never know when and how a difficult financial situation might put you on your knees.

Experts suggest that you must build an emergency fund enough to tackle your 3 or 4 months expenses. However, six months of expenses are recommended for single-income households.

2. Live within your means

It’s a wise idea to create a monthly budget and limit your expenses to 30% of your income. By doing this, you can live within your means and avoid overspending.

Prepare a list to cut expenses. Add unnecessary items like Netflix subscriptions or eating out at expensive restaurants. When the list is ready, make sure you find things you can live without. This might be a temporary arrangement. You may again modify the list as per your changing financial situation.

During recessions, it is usually the time when you’ll get lower interest rates, and that’s your advantage. You can refinance your existing debts with a lower interest rate. This way you may save a pretty decent amount every month.
You can refinance your existing auto loans, mortgage, student loans, and credit card debts. You can save a lot by doing so. During a rough time such as recession, that money might make a difference in your financial life.

You must pay down any outstanding debt. It can be reasonable to make all your monthly debt payments and make some breathing room in your budget.
It is quite common that due to economic downturns many lost their job. If you’re also worried about that issue, find ways to reduce your debt now and get a peace of mind.

“A March 2019 Bankrate survey revealed that 13 percent of Americans aren’t saving more because of the amount of debt that they owe.”

When you’re in a good financial state, it can be easier to keep focussing on details, like making sure every bill of yours gets paid timely. But during a recession, the situation might become rough. If you have lots of debts and still don’t repay them, your credit score might get a hit. The employment issues are quite common during a recession. So, with a bad credit score, it will be very difficult to get a new job also.
As Jeremy Shipp said, “this all depends on your credit score, so make sure you are always maintaining great credit discipline.”
So, you must make room in your budget that in any way you can maintain your credit score by categorizing every expense.

There are other things that you may also consider to include as your budgeting strategy. You must review your insurance coverage so that during a recession you don’t overpay on premiums. You may face an economic crunch during this crisis. So, make sure you opt for a side-hustle and invest your spare time to supplement your income.
Last but not the least, do not suddenly change your investment strategy. If you have a solid, long-term strategy in place, you don’t need to follow a new strategy for fighting the recession 2019.